The Auto Home Profits Scam. Avoid it at all cost. The major risk related to working online is the considerable amount of scams that one could fall for.  After all, a lot of people dream about living large just from working at home on their own time and being their own boss. Auto Home Profits claims to be a legitimate source of income from online work, although a lot of red flags pop up upon visiting their site. Even more of these bad points come up with a little bit of digging.

The Red Flags and Inconsistencies

First off, the landing page for Auto Home Profits is eerily similar to that of similar “work from home” websites. Searching the Internet would most probably reveal a plethora of other similar-looking sites trying to sell people dreams of working minimal hours from home and being their own boss. This alone is a clear indication that this website and the program it offers is not trustworthy.

Another sketchy thing about the Auto Home Profits site is its banner at the top of the page, which shows how many shares it has different social media platforms such as Twitter, Facebook, and Google Plus. For a program that has supposedly helped multiple people make more than their salary from the comfort of their own home, it is unusual that not even a single person would share how they managed to achieve this kind of success.

They also say that they have been featured on multiple programs and are the “number one” work at home program, which is a claim that many of these scam sites make to entice potential members. This is not true because even an extensive online search could give no evidence to back this up. Why would the “number one” work at home program that has been featured multiple times on a variety of programs not have rave reviews online?

Aside from this obvious cliche, they also claim that their program only has limited slots, so an interested person needs to hurry and sign up at the quickest possible instance. However, this is once again only a ploy to get someone to give up their personal information as soon as possible. In fact, refreshing the page over and over again will still give access to these supposedly limited slots for the program.

Auto Home Profits claims that they can match potential members with corporate giants such as Google and Bing even if this person does not have any prior working experience. Although, why would these big companies hire someone who potentially would have no idea what they are doing and would have to be taught for a considerable period of time first. It would be more efficient and economical to just hire someone with experience in the field instead. They even went so far as to say that no job they give is binding, which is a too damn good to be true deal from the companies mentioned above.

Auto Home Profits does not even state what kind of job someone would do if they were to join their program. They state on their website that once they are connected with the previously mentioned corporations, then the job would be explained by the employer. Again, why would these multi-million dollar conglomerates hire someone blindly, especially if the person they are hiring does not even know what they signed up for? 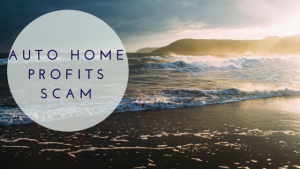 There have also been multiple changes made to the Auto Home Profits website. Much like the rebranded versions of this site, it contains only a landing page. It should definitely raise suspicions when the number one program to make money from working at home has such a poorly designed website. They even have a video embedded on the page that looks like it was amateurishly made. Surely, they would want to give off a professional image, but why use this? These are the types of things that instantaneously reveal Auto Home Profits as a scam and nothing more.

On their previous home page, Auto Home Profits state that their service is a 100% free to join. However, an initial investment is actually asked for during the signing up process. Making this investment requires giving out bank account information, which is never a good sign. The people behind Auto Home Profit could use this information to make small charges, as to make them unnoticeable for a considerable period of time. On the other hand, they could use it and tap it dry in one fell swoop. Either way, there is no winning for the person who gave up this information. This is why it is best to be able to identify the red flags present in most, if not all, scam sites.

Auto Home Profits claims that they are giving out their exclusive program at the low price of $97. However, when a person refuses to give into this offer and instead chooses to look around the site a little bit more, they will offer it at an even lower price of $47. On some pages, it is completely different, with them offering the program at a 20% discount. This is done in order to entice anyone unwitting enough to actually give out their private information. None of these deals are worth it at all.

Prior to being heavily edited, the Auto Home Profits page featured a testimonial from its founder, a woman named Shelly Davis. Once more, a search for Shelley Davis, the developer of an online job platform that has supposedly helped hundreds if not thousands of people, yields nothing in relation to legitimately making money online. “Shelley Davis” is nothing more than a fake name being used in a falsified testimonial next to either a stock image, a stolen photo from the Internet, or the photo of an actor.

In this testimonial “Shelley Davis” states that she was divorced at a young age and was forced to find a way to support her six-year-old child. Another testimonial from Ms. Davis is featured on the website. In this one, she again claims to have been divorced at a very young age, but this time she has two daughters. This testimonial also uses a different picture. In fact, the images used are stock photos that could also be found on similar scam sites.  Again, these inconsistency proves that Auto Home Profits is not to be trusted.

There is no contact information available for the people who are behind Auto Home Profits. It would be hard for a person who was scammed to make claims against them because first of all, it will be nearly impossible to find them. Clicking on the multitude of links and sign up buttons littered throughout the site does not help either because they redirect to blank pages, possibly because the original content of these pages were taken down due to legal reasons.

Can This Actually Make You Money?

The way Auto Home Profits claims to make their members exorbitant amounts of money is through affiliate link posting, which is basically a form of spam. They claim that each link posted online could net a person up to $15. Using simple mathematics, this means that a person could make hundreds if not thousands of dollars simply by posting links. This is extremely unbelievable, as companies could just pay other people way less money to accomplish the same thing. Posting links is also completely different from working for the previously mentioned companies – Google and Bing – who quite frankly do not need much help promoting themselves. That is if they even need to promote themselves at all in the first place.

Auto Home Profits claims that their members make up to $379 per day, which is the same amount similar websites promise their members. This is suspicious not only because this is another major similarity to other online work at home scams. Auto Home Profits could not be the “number one” in their industry, as they claimed themselves if their supposed competitors have similar looking websites and offer basically the same opportunities.

This can only make a person money if lots of people click on the link they posted and end up buying the product it links to. So affiliate link posting could work if the person giving out the links has a large enough following on multiple platforms. However, for a layperson, this would not work out too well. These people would be better off investing their money into legitimate services, that while more effortful and time-consuming, guarantee transparency of results.

This is not the proper way of doing affiliate marketing. It requires some time and effort to drive traffic to your site. it also requires some skills. Wealthy Affiliate is the best platform to learn all these skills and it will not cost you anything to join.