You are here: Home / Reviews / Not good / What is Making Cash Ads?

What is Making Cash Ads? Making Cash Ads actually makes its profit through a revenue sharing program that is dependent on getting new members aboard.

Among the multiple sites that offer people the chance to work from home, be their own boss, and work their own hours, Making Cash Ads is most certainly one of the better-designed ones. They have an Alexa rank of 71606 and offer support for different languages. They also have a sizable following on social media as well as a YouTube channel on which they post promotional videos. Unfortunately, these things will not mean that platform is legitimate. While the people behind this site put in the extra effort to conceal the true intention of their site, there are still red flags and inconsistencies present.

They also have a sizable following on social media as well as a YouTube channel on which they post promotional videos. Unfortunately, these things will not mean that platform is legitimate. While the people behind this site put in the extra effort to conceal the true intention of their site, there are still red flags and inconsistencies present.

Name: Making Cash Ads
Website: makingcashads.com
Owner: Unknown
Price: Free to Join ( you have to buy ad packs )
Rating Stars: 1/5
Bottom Line: This platform should be avoided as it does not have real business sense. I suggest you check out my #1 recommendation as it is really a service to educate people how to make money online. 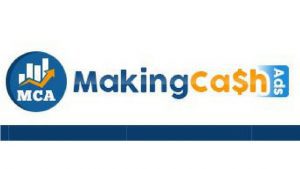 Upon the first visit of the Making Cash Ads website, potential members are greeted with a large banner with a flowchart that states that in order to make money, they must first post and view advertisements. The people behind the site make it appear as though advertising is the product they are selling, but in reality, they are only using this as a front so their scheme will not be shut down by the authorities.

They use this strategy in order to be registered with the Saudi Arabia MCI (Ministry of Commerce and Investment) under RC #2252066517. It also helps that this entire operation is based in Saudi Arabia because this means authority figures from the United States will not be able to crack down on it.

In simpler terms, Making Cash Ads is a Ponzi scheme. It pays its existing members through the investments of new members. If no new members are joining the program, they will not be able to pay the ones already signed on and the entire program will subsequently come crashing down.

They have carefully worded their scam to avoid being caught. Instead of telling potential members that they will be making an “investment,” they are instead told that they are purchasing what they call an “ad pack.” This will supposedly place the user in the Making Cash Ads system, giving them a share of the company’s income.

This is just a less conspicuous way of them making money from new members and sharing it with the ones already signed up, making the latter believe they are actually making money from the program. The terms and conditions page of Making Cash Ads raises a number of red flags.

First off, they claim no responsibility regarding how much money a user spends on their site. This means that in the event Making Cash Ads stops generating income for its members, those who chose to invest large amounts will not be able to blame the people behind it if they lose considerable amounts of their hard earned money.

Making Cash Ads may also introduce a membership fee if they deem it necessary, possibly to prolong the life of the scam if there are no longer any new members. They also claim that no purchases made on the site are refundable in any way and that they reserve the right to suspend an account if a dispute is made against them and their service.

There is an entire page on the Making Cash Ads site dedicated to showing their most recent payouts. If it turns out that these statistics are true, then the people behind this site are clearly endangering their members. In total, they claim to have paid out over $200,000 to their 7,811 members since they first launched back in February 10, 2016.

However, despite extensive searching, there is no available evidence to back this claim up. In fact, conducting an online search for Making Cash Ads yields results of even more negative reviews, further implicating it as nothing more than a scam.

When a person looks to confirm the legitimacy of a work from home platform they are planning to join, one of the first things they look at are the testimonials regarding it. While there is a testimonial page available on the Making Cash Ads website it is mores filled with random posts than trustworthy ones. For example, many posts are containing only single sentences, mostly “My name is” followed by the name of the user who supposedly submitted that testimonial.

Even worse is that other testimonials are only a single word in length such as “laid,” “good,” and “palistine.” There are only 42 testimonials available on the site, and most, if not all, of them, are highly unbelievable. It’s hard to confirm the legitimacy of these testimonials because a considerable amount of them have blank profile photos, while others photos of objects, pets, or other people that are clearly not them.

It is also possible that the pictures used in an attempt to add legitimacy to these statements were merely taken from online sources such as social media or stock image providers. There is also a support page available on the site, allowing users to fill up a form if ever they have any concerns.

However, it is not revealed who these tickets are sent to. In spite of the fact that Making Cash Ads has provided a contact number for concerns and admitted that they are based in Saudi Arabia, there is still not a single name associated with the program. If a member were to realize that they are being scammed, it would be hard for them to take legal action because they would not know who to point the finger at.

Do People Actually Make Money From This?

Although it is free to sign up to the program, merely joining will not make new members any money. In fact, the only person who stands to make money from this is the person who referred these members in the first place. For new members to make their own income, they must first purchase what are known as “revenue sharing ad packs.” There is; however, a membership upgrade available although not much detail is shared about it on the non-member areas of the site.

There are four tiers of ad packs available from the Making Cash Ads site. The higher tier ad pack a person avails, the more money they make from the investment of the members that sign up after them.  It is also important to remember that while a person can make money off of the Making Cash Ads platform, none of the following ad packs will make a single cent of profit if no new members join.

A single purchase may be reflected on a person’s account instantaneously, or it may take around 30 minutes according to their frequently asked questions page.

Again, if no one purchases these packs, this entire operation will be forced to shut down. The reason why Making Cash Ads requires its members to purchase first 100 ad packs from the lower tiers is to keep them spending. What this means is that they would have enough income to pay the supposed returns of their other members, while still pocketing a considerable amount, to keep their scheme going.

If the people behind Making Cash Ads allow immediate purchasing on the highest tier they offer, it could be possible that they will be unable to pay the promised amount to their members on schedule, while still making money for themselves.

Regardless of how many scams are available on the Internet, a person should not be dissuaded from pursuing an online business.  There are legitimate ones, and while these may take more time and effort, one can rest assured that they will make the money they deserve. Hopefully, pointing out the red flags present on Making Cash Ads will help people in identifying similar ones on other money-making schemes.

This platform should is not recommended as it does not have real business sense. I suggest you check out my #1 recommendation as it is really a service to educate people how to make money online.

Feel free to ask questions, post comments or subscribe to my email list to be the first to get the updates and offers. You may also visit me so I can answer your questions directly at Wealthy Affiliate.com ( link to my profile page )

Name: Making Cash Ads
Website: makingcashads.com
Owner: Unknown
Price: Free to Join ( you have to buy ad packs )
Rating Stars: 1/5
Bottom Line: This platform should be avoided as it does not have real business sense. I suggest you check out my #1 recommendation as it is really a service to educate people how to make money online.