You are here: Home / Reviews / Avoid / WHAT IS COMPLETE PROFIT CODE ABOUT? A SCAM? FIND OUT HERE!

What is Complete Profit Code about, a scam? Let me explain.

Most people do not have disposable income, so it would only make sense that they look for other sources of income in order to live their dream life.

Since working online jobs has gained massive popularity over the past couple of years, those looking for these types of jobs need to know how to detect which offers are legitimate and which of them are fake.

After reading my review you will have information about this website and you will also know the best way to make money online which is my #1 recommendation.

What is Complete Profit Code? 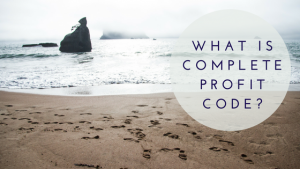 They make very strong claims that a person can make hundreds, if not thousands, of dollars working for just a short amount of time.

They also play on people’s emotions by promising that they can be their own bosses, while still being able to achieve an extremely lavish lifestyle.

The problem with this site; however, is that it uses multiple cliches that implicate it as a scam website.

The people behind this page use many of the same lies similar sites use to try and coerce people into joining and giving up their personal information.

While the Complete Profit Code website has undergone multiple changes, its previous red flags strongly implicate it as a scam website.

Upon seeing these signs, it would be hard to argue that this program is legitimate, even at the slightest.

The first of these bad signs is the use of fake news.

Like most scam sites, Complete Profit Code features an “As Featured On” banner featuring logos of some of the most trustworthy news outlets in the United States such as Fox News, MSNBC, and USA Today.

The truth is that none of these news sources have ever featured Complete Profit Code in their reports and most probably, they never will.

If there was ever a chance for them to be featured on these, it would most likely be on a report exposing scam work from home platforms.

The people behind this scam added this banner to try and add credibility and gain the trust of unsuspecting visitors.

Complete Profit Code also features a video of a news report from a local TV station on their page.

While this video does talk about the potential benefits of working on an online job from home, not once does it mention Complete Profit Code.

Again, this is done to try and add legitimacy and gain trust for the program.

It would not be surprising if these news organizations decided to do a crackdown on this operation, as what they are doing is extremely illegal.

At one point, the site for Complete Profit Code was made to look like a clone of the Fox News website.

In another iteration of the site, there is even a fake news article to try and promote the program.

The fake article, from a Dianne Fisher of “5 News Daily,” features a woman named Megan Carlson from Pennsylvania.

This report claims that she is a 28-year old woman who began working online jobs out of curiosity.

Not only is 5 News Daily nonexistent, but both Megan Carlson and Dianne Fisher are as well.

Fake testimonials such as this one are used to trick people into thinking that they can achieve the same level of success.

According to the previously mentioned article, the person who developed the Complete Profit Code Program is a millionaire named Tony Anderson.

Meanwhile, other parts of the website feature statements claiming that a woman by the name of Karen Evans is the one who developed it.

The same statements, reports, and names are used for other scam websites with a similar premise.

Another suspicious thing about these statements is that they use photos of completely different people for the same Karen Evans.

Most likely, these photos are from paid actors or are taken from online sources.

Complete Profit Code also features a number of fake social media posts to try and trick people into thinking that laypeople have found success through this program.

However, these posts are merely doctored and are from accounts using aliases for their names and stock images as their profile pictures.

Searching for the names of the people who are supposedly behind Complete Profit Code yields no results related to this program.

This is particularly suspicious since if it were legitimate, there should at least be a single report or review regarding the success stories of these people.

Unfortunately, just like the supposed news articles Complete Profit Code were featured in, these do not exist.

Another cliche used by Complete Profit Code is that they claim the opportunities they provide are limited.

They say that there are only a handful of their positions left on their program, which is why potential members need to sign up as quickly as they possibly can.

However, no matter how many times a person refreshes or revisits the page, the same number of opportunities will still be available and never run out.

The people behind Complete Profit Code also state that people who sign up can start earning immediately.

They use these strategies to try and rush people into signing up without thinking to give up their important information as quickly as possible.

Upon attempting to sign up for the Complete Profit Code program, they will attempt to charge the person $97.

While to some people this may seem like a cheap investment compared to the possibility of making thousands of dollars a month from the comfort of their own home, paying this amount would give scammers access to the person’s bank account.

Those who gain access to this type of information may use it to make small purchases in hopes that they will be unnoticeable.

In some instances, they may take all the money in as short of a time period as possible.

If ever a person is not convinced that $97 is too much of an investment, they may try to bring the price down or offer a certain percentage of discount, but these will all lead to the same result.

Any form of payment made for this program will just give scammers access to a person’s bank information, which they will then use to take massive amounts of money from the account.

This strategy is identical to the one used by other scams.

Aside from this dodgy sales pitch, Complete Profit Code also attempts to get the email addresses of potential members.

They could potentially make money off of these email addresses by selling them to third parties or by sending spam themselves.

The changed website for Complete Profit Code features multiple links and photos that do not lead to anything at all.

In fact, they lead to a blank page that says the linked page cannot be found due to a server error.

There is no contact information available for the people behind the Complete Profit Code program.

There is also no more mention of either Tony Anderson or Karen Evans on the new site.

This would make it hard for a scammed person to make claims against anyone because it would be difficult to determine where to start.

The current website also features a banner, which supposedly shows how many shares the program has had on different social media platforms such as Facebook, Twitter, and Google Plus.

What is weird is that for a program that has helped countless people make a better life for themselves at home, they have zero shares on all major platforms.

Clicking on any one of the buttons on the banner will change the value to one, but refreshing the page reverts the amount back to zero.

This just shows how the website is poorly coded.

Can This Actually Make You Money?

Complete Profit Code claims that it could make its members up to $379 a day through working for just a single hour.

The only problem is that there is no concrete evidence whatsoever that this program can make its members even a single dollar, let alone hundreds in such a short amount of time.

They further claim that the people who sign up need not have any previous experience in the type of work that they are offering.

Working for Complete Profit Code requires a person to do affiliate marketing or link posting.

While this could actually make a person money, the amount they would net is extremely far from the promises made.

Since people in this line of work only make money if people click on their posted links and buy the associated product.

It would be hard for a layperson with the minimal online knowledge to make even a single dollar from this program, let alone thousands in a day.

While legitimate forms of online work are more time-consuming and effortful, people can rest assured that these will actually pay off.

While the prospect of making thousands in just a few hours may seem tempting, it is important to remember that these offers most likely have the same cliches and red flags as mentioned above.

This is why it is important to know how to identify these in order to easily discern a certain website or program as a scam.

If you are tired of scams like this I recommend you try Wealthy Affiliate for free then see if it is for you.

You will not regret joining a community of over 800,000 online entrepreneurs willing to help each other.

You may also visit me so I can answer your questions directly at Wealthy Affiliate .com as it is where I hang out with my buddies most of the time. (link to my profile page)