You are here: Home / Reviews / Not good / What is Postcards to Wealth, A Scam or Legit? 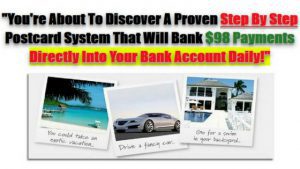 What is Postcards To Wealth, a scam or legit? You are in the right place to know more about this site claiming you can make money using postcards.

Postcards to Wealth is one of the postcard schemes that supposedly enables people to make massive amounts of money from the comfort of their respective homes.

This platform is similar to American Bill Money as it said to make people earn money through sending postcards.

Whenever another person signs up through one of these postcards, the sender receives $98. Not only that, but members also receive $98 every month so long as they are a member.

This platform’s promises are extremely unbelievable. This method of making money is also eerily similar to a pyramid scheme.

Name: Postcards to Wealth
Website: postcardstowealth.info
Owner: Unclear
Price: $98
Rating Stars: 1/5
Bottom Line: This platform is MLM based recruiting while using postcards and cash gifting to make it look legit. I will not consider this as a scam, but this is not a good business model.

I suggest you try Wealthy Affiliate for free and see for yourself if it is for you. It is about time to learn the skills needed to be successful in online business, so you won’t fall for a trap like these easy money schemes.

The landing page of this site features a video of the founder “Toni DiPaolo.” The actual spelling of this name is not revealed so that people have a difficult time searching for him online.

The previously mentioned spelling is the most suggested in online searches, but still, yield no results related to online marketing nor to the scheme in question. It is possible that Toni DiPaolo is nothing more than an alias the site’s founder uses to conceal his true identity.

This is so he may not be implicated when his whole operation is unearthed as questionable. In the video, he rambles on about extravagant promises, yet offers no clue as to how his platform accomplishes this.

If people were to guess, then it would be most probably an MLM due to the fact that people only make money based on how many people sign up and not how many postcards they send. These program work by paying existing members a portion of the money being paid by new members upon the latter signing up.

Members will keep pumping money into the system as long as they are made to believe that they are earning money. However, once the people behind the program see that there is no more money being made through referrals, they will lose their income stream and will most probably just shut down the operation without leaving a single trace.

This will leave people in the negative in terms of their investment because they kept putting their own money in. However, there is no longer any money coming in from the lower levels of the pyramid to sustain their supposed income.

Below the video is a form in which to place a person’s full name and their email address. Accomplishing this form allows for access to the rest of the website. The form reminds potential members to input their “best” email address.

This could be because they will send spam to this email. Inputting a false name and non-existent email address will still grant a visitor access to the rest of the site, which is a major red flag that unfortunately backs the previous statement up.

Upon reaching the next part of the site, users are greeted with a large marquee, which says that this program pays $98 daily to all of its members’ bank accounts. This is inconsistent with what the video on the landing page said a while ago that the $98 payments are made on a monthly basis.

These statements are only used to lure people who are gullible enough to believe that a postcard delivery service could sustain paying all of its members $98 every month no matter their performance, let alone $98 every single day.

How Does this Service Claim to Make People Money?

Below this statement is another video featuring DiPaolo. This video is hosted on YouTube but is unlisted because of its misleading and potentially harmful content.

It was uploaded on a channel named “Retire with Adam,” which is suspicious because the company founder’s name is Toni and there has so far been any mention of an Adam whatsoever. It is possible that this same channel hosts fake and misleading videos for other scams, but they are all unlisted.

This could explain why there are currently no public videos available on “Retire with Adam.” Comments and ratings have also been disabled for this video because these may implicate the video as fake. The video explains how the program works but in a very vague manner.

The way DiPaolo explains it still makes it appear as it is  MLM. There is another statement below this video that adds further suspicion to the program’s legitimacy. It says that working on this platform does not guarantee that a person will become rich overnight.

In fact, they cannot even guarantee that a person will make any money off of this by virtue of their “work ethic” or lack thereof. This is simply a confusing excuse they can use when members are asking for their money.

The people behind the site can simply say that these people did not work hard enough in order to avoid paying them. The site’s content can be changed at any time and memberships could also be terminated without prior notice.

Having memberships terminated could also serve as an excuse for non-delivery of profits. In order to make money from the site, a person would first have to mail 100 postcards.

A person would also have to pay $98 to sign up for a 30-day trial of the program, which raises a red flag because this is the exact amount that is promised to potential members, further evidence that this platform is a pyramid scheme.

Another point to show that this is a dubious program is the fact that members do not receive money from the site, rather they get it from the people they refer. This platform operates in the form of cash gifting to avoid being labeled as a scam.

The site’s terms and conditions state that any issues and concerns should be taken up only with these parties in an attempt to rid this scam of any wrongdoing. Paying $98  for a trial run is not a good deal either, as that is the same price point that the people behind this website are charging for a monthly membership.

The membership fee for this program also automatically bills itself off a person’s account, so those who believe they have canceled their membership based solely on not voluntarily paying fees may be in for quite the shock. Unfortunately, there is a no-refund policy for membership fees and other payments.

Full resell rights are offered for this guide, but it is highly unlikely that a person could sell this. Another statement on the site claims that Postcards to Wealth is a part of a multi-billion dollar mailing industry.

However, despite extensive online searching, no concrete evidence suggests that this is the case. In fact, in spite of the recent boom of interest regarding online work from home jobs from even large news outlets, there have been no reports or reviews concerning this platform that has come from trustworthy sources.

There is a video on the site featuring the testimonial from members of the site. Again, this video is unlisted on YouTube and has had comments as well as ratings disabled.

In the video, a David Michalek details his success story with this program. He has supposedly made thousands upon thousands of dollars from working just a couple of hours every day sending postcards from his home and being his boss.

However, no available evidence suggests this has happened to Mr. Michalek or to anyone else for that matter. In fact, searching for the name David Michalek yields results for a photographer, but nothing related to rags to riches story thanks to postcards.

This means that the name used in this video is an alias and the photo used to accompany it was likely just taken from a random social media account or stock image resource. Another inconsistency with this testimonial video is that it was posted on a channel called “Unlimited Lifestyles.”

Another testimonial video, one from “Adam” and “Kristine,” is posted on this page, but aside from these videos, the channel seems to be more focused on promoting an electrical company, Sosa Electric.

There are other options available for those trying to make money by working on the Internet.  These jobs may be more time consuming and require more effort, but at least one can be sure that they will receive the money they deserve.

Hopefully, after learning of the red flags and inconsistencies listed above, people will become more diligent in determining which opportunities are legitimate and which ones are merely trying to scam them.

This platform operates in a cash gifting scheme similar to American Bill Money. A member joins and pays $98 a month then has to pay $35 for the 100 cards template  (you have to print the postcards yourself) then send it to 100 people on their mailing list. You also have to pay $59 a year as an admin fee. All of these amounts goes to the owner of the program.

When somebody who receives your postcard decided to join the platform, you will get the $98. This platform is MLM based recruiting while using postcards and cash gifting to make it look legit. I will not consider this as a scam, but this is not a good business model.

I suggest you try Wealthy Affiliate for free and see for yourself if it is for you. It is about time to learn the skills needed to be successful in online business, so you won’t fall into a trap like these easy money schemes.

Feel free to ask questions, post comments or subscribe to my email list to be the first to get the updates. You may also visit me so I can answer your questions directly at Wealthy Affiliate.com as it is where I hang out with my buddies most of the time ( link to my profile page ).

Name: Postcards to Wealth
Website: postcardstowealth.info
Owner: Unclear
Price: $98
Rating Stars: 1/5
Bottom Line: This platform is MLM based recruiting while using postcards and cash gifting to make it look legit. I will not consider this as a scam, but this is not a good business model.

I suggest you try Wealthy Affiliate for free and see for yourself if it is for you. It is about time to learn the skills needed to be successful in online business, so you won’t fall for a trap like these easy money schemes.